If you’re interested in robotics, it’s smart to start with simple projects unless you already have a strong technical background. Otherwise, you might face an unnecessarily steep learning curve and feel overwhelmed as a result. This list was curated with that approach in mind. Parents looking for a toy for their child, aspiring roboticists, or those just looking for fun will all find something in this list of 6 programmable robot kits for beginners. These simple kits (no soldering or power tools required)  include step-by-step lessons and are great for open ended learning. 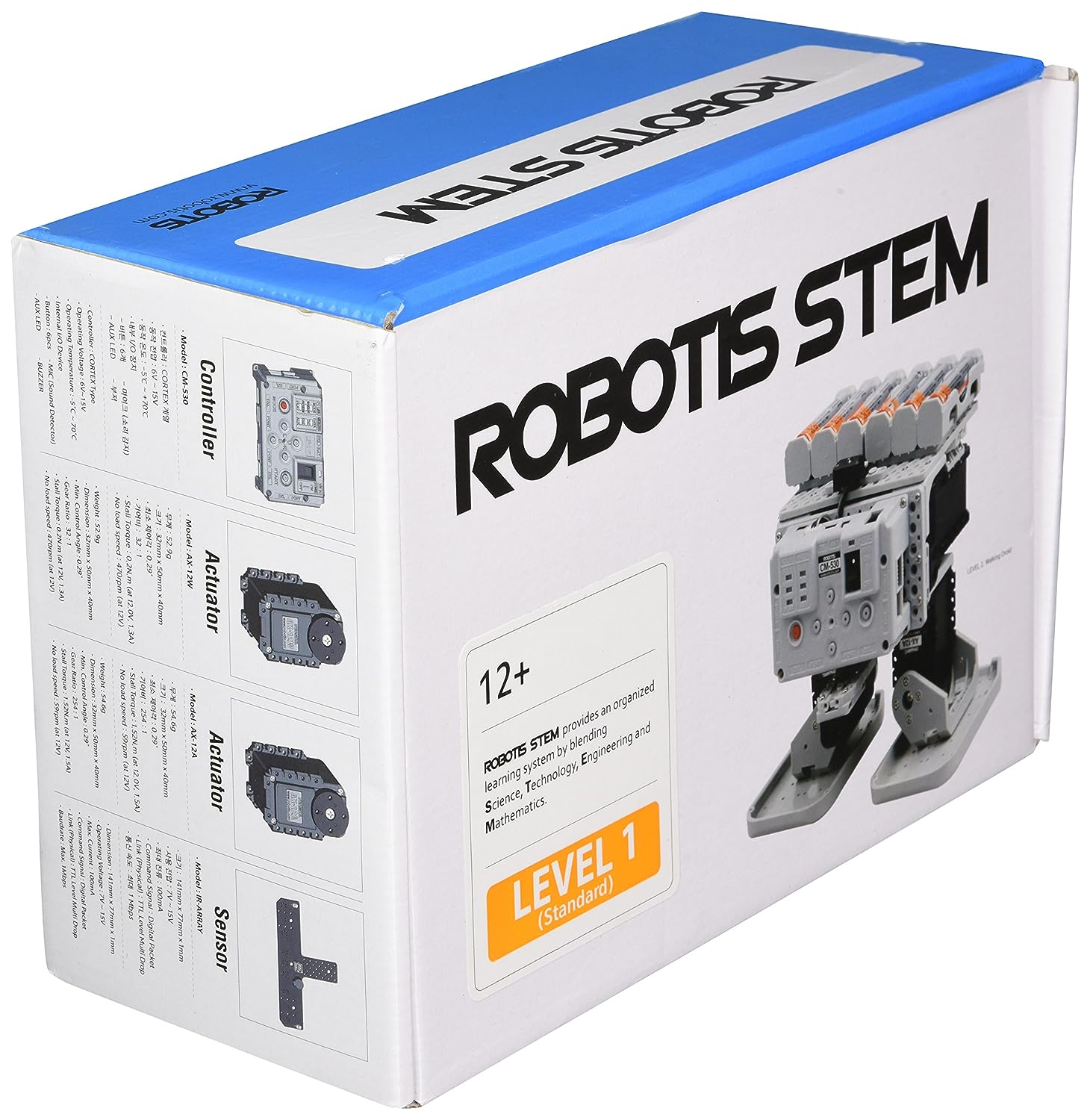 The ROBOTIS STEM Level 1 is a great kit, full of 21 weeks of educational material, in which you build seven predesigned programmable robot kits, perfect for beginners looking to learn something new. The kit includes everything you’ll need. You can also create your own robots from these parts, something different than anything in the instructions. The curriculum contains three lessons for each robot: a basic phase where you learn the robot’s scientific and technological principles, after which you build the robot; the application phase where you learn the appropriate robotic and mathematics programming; and finally the practical phase where you use what you’ve learned to make your robot solve problems. To program and manage the robots, you’ll use RoboPlus Suite, which is included with the kit or can be downloaded here. To run the software, you’ll need a computer running Windows XP Service Pack 2 or later. 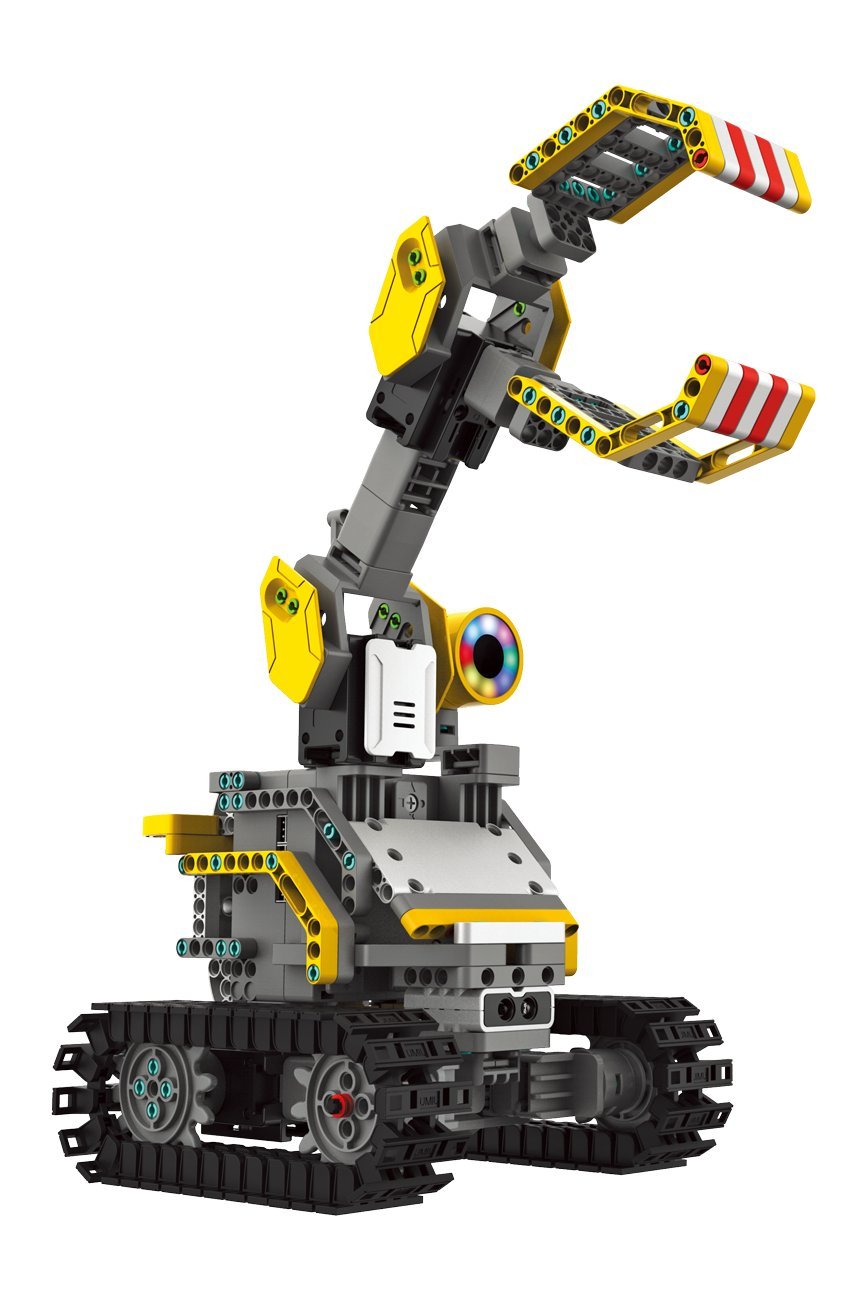 There are several programmable robot kits for beginners within the Jimu Robots line. Choosing which to include here was challenging, but I’ve settled on UBTECH’s Jimu BuilderBots Kit simply because it reminds me of being a kid who loved big machines. The BuilderBots Kit has instructions for the GrabberBot and DigBot, though you can use the parts to build anything else. The robots are controlled via a Bluetooth connection and the assembly instructions and coding abilities are all contained in the free Jimu app, so an Android or iOS device with Bluetooth is required (App Store link and Google Play link). There are two ways to program Jimu robots. You can use PRP (Pose, Record, Play) or the Blockly programming language. With PRP, you place the robot in several positions and use the app to record each position as you go. When you activate the recording in the app, the robot will move to each position by itself. The Blockly language is closer to traditional computer code, but is written by connecting together puzzle-shaped pieces. This will allow you to give the BuilderBot more complex behaviors than PRP. Snap-together plastic pieces are used to make the robot bodies. 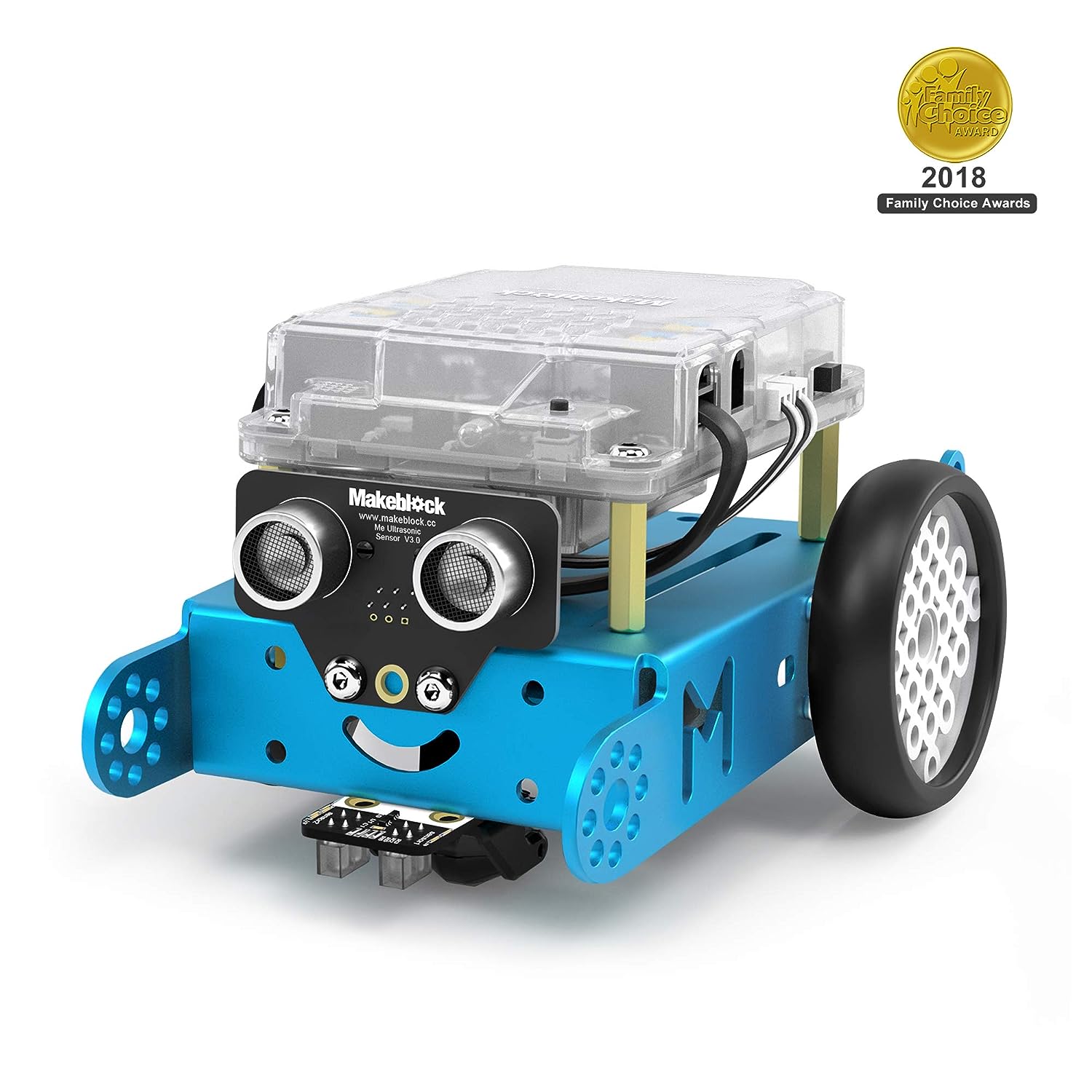 The Makeblock mBot is one of the simpler programmable robot kits made for beginners.  It comes with three programmed presets: obstacle avoidance, line following, and manual control mode. Write custom programs for it with Makeblock’s mBlock language, which, like Blockly, is written with linked puzzle pieces. The mBot’s construction is relatively simple and straightforward compared to the other robots on this list. If you want to add to its structure, you can use LEGO® or Makeblock’s add-on pack. To program the mBot, you’ll need an Android or iOS device with Bluetooth to connect to the mBot and use the free Makeblock app (App Store link and Google Play link).  The app also contains assembly instructions (or you can click here to get the instructions in PDF format).  I’m a big proponent of using games to aid learning, so I’m particularly fond of Makeblock’s “gamified learning,” where mBot is used in the real world to complete in-app game tasks. In addition to the app (or instead of it), you can use mBlock 5, a desktop program available for Mac and Windows that allows you to code in the same mBlock language or switch to Python. The ability to use Python opens up a whole range of possibilities, including the use of AI. mBlock 5 even integrates Microsoft cognitive services and Google deep learning. These tools take the mBot from a simple toy to an advanced learning tool. To use the mBot with mBlock 5, you’ll also need to install mLink and you’ll need a USB cable. 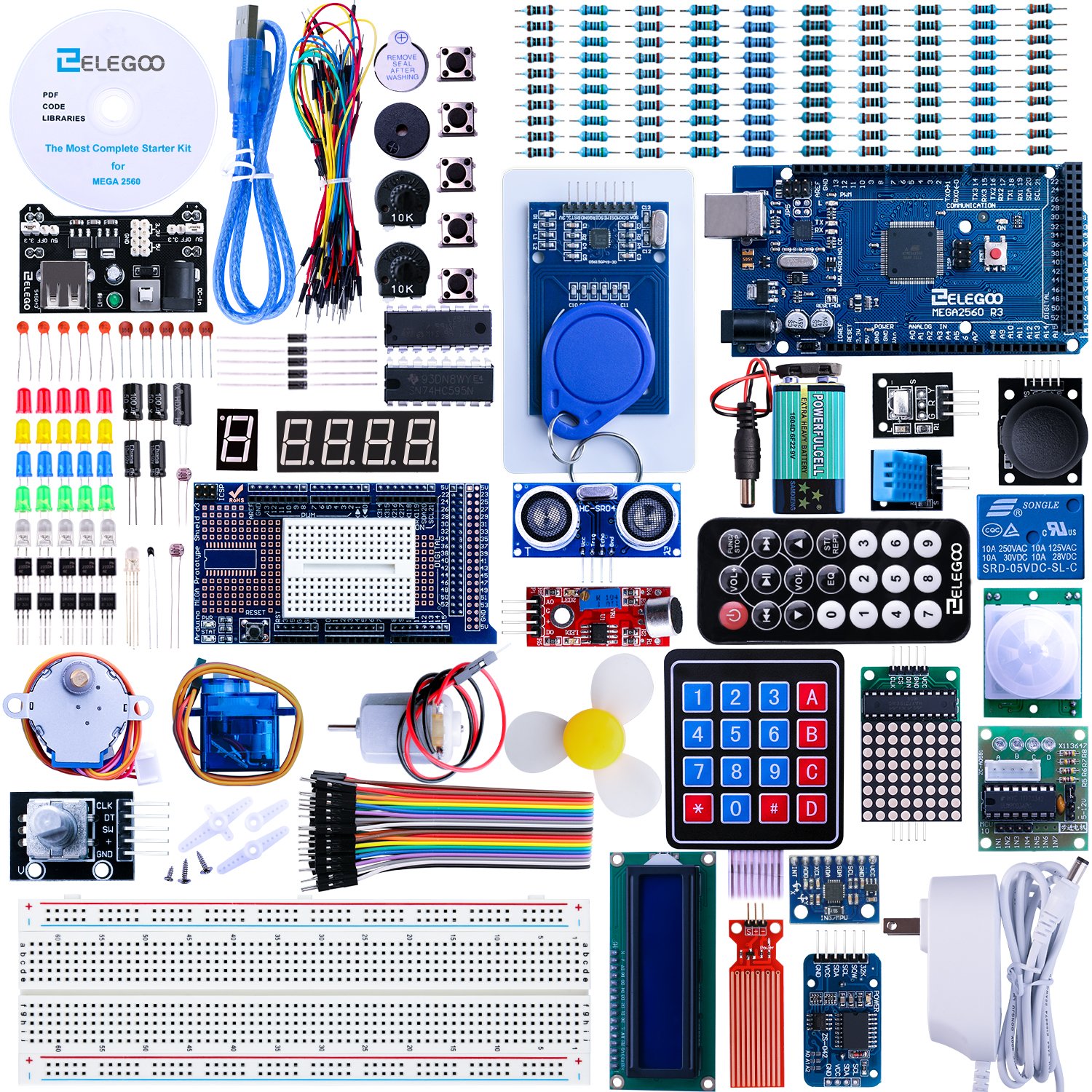 To include the Elegoo Mega 2560, I had to be a bit broader with my use of the word “robot.” This is not like the other programmable robot kits for beginners in this list. This is a 200-piece kit that includes various electronic components, such as buzzers, LEDs, motors, etc. It also comes with a breadboard and an Elegoo branded Arduino microcontroller. A free PDF (which can be accessed in a ZIP file here) is available containing 33 lessons where you’ll build various circuits using the provided components and set up the microcontroller to control them. Coding an Arduino is not as simple as the block-style languages mentioned earlier. Don’t worry though because the PDF walks you through it, and there are plenty of books and free online resources. If you’re ready to work with some of the more advanced aspects of robotics, but still at the beginner level, such as interfacing components with a microcontroller, then this kit is a perfect place to start. The Arduino IDE (integrated development environment), which is what you’ll need to write your code, is available for free for Mac, Windows, and Linux. 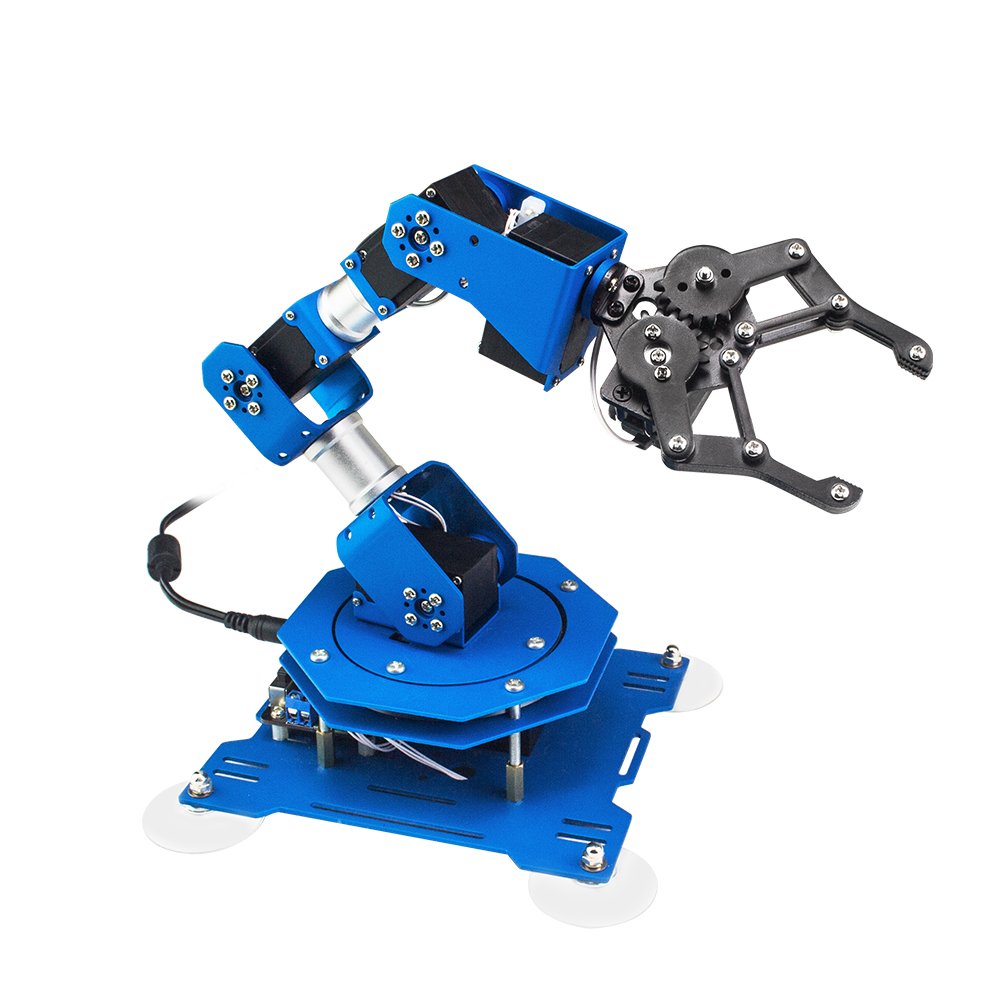 This is one of the more complex programmable robot kits  in this list, but it’s still suitable for beginners. The LewanSoul xArm is a robotic arm with a claw grip and six degrees of freedom. Unlike much of the other robots in the list, you assemble the xArm using metal parts and screws (tools are included). The instructions to assemble it are in YouTube videos posted by LewanSoul, accessible by scanning a QR code. Out of the box, the xArm is programmed using a Microsoft Windows program, an Android app, or manual positioning, all of which is pretty straightforward. You can also control it dynamically using a mobile phone, a wireless computer mouse, or a wireless controller, all connected via Bluetooth. You don’t need to learn a programming language to get this thing running. However, once you’re ready to take on some of the more challenging aspects of robotics programming, you can purchase the LewanSoul Sensor Kit, which is a separate microcontroller and set of sensors which can be used to greatly expand the xArm’s capabilities, not only through the use of the sensors, but through the use of Arduino programming. This robot is great for taking you from beginner to advanced topics, such as using linear algebra for positioning. 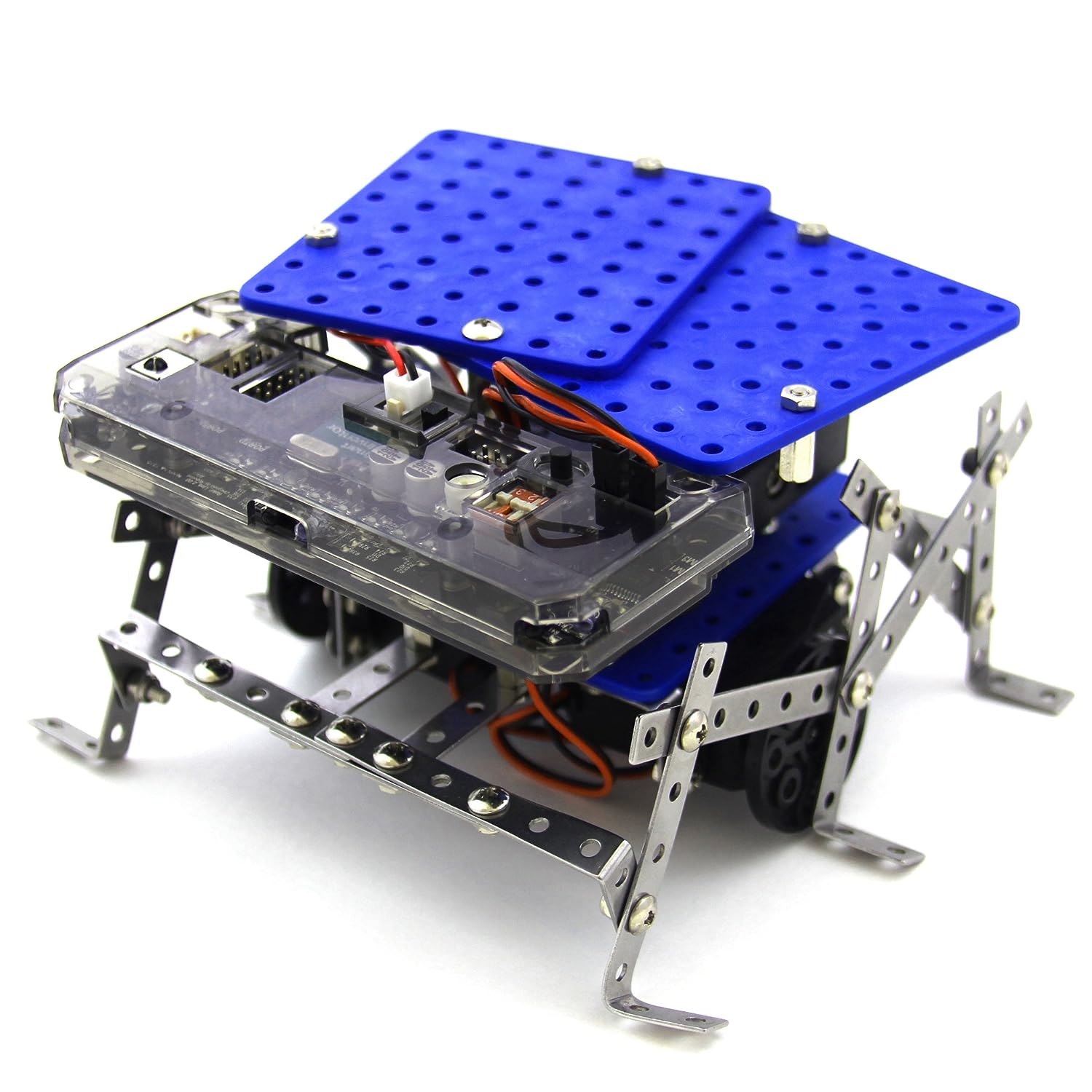 Robolink designed the Rokit Smart with education in mind. It includes instructions to build 11 programmable robot kits for beginners, though you can build anything else with the provided parts. The robots are assembled using metal and plastic parts screwed together, and programming is done via Arduino, again using the Arduino IDE available for Windows and Mac. The kit includes everything you need to build the robots in the Rokit Smart, except for a computer and batteries. The instructions and lesson plans for Rokit are freely available on the Robolink website, including lessons on programming the Arduino.

After going through this list, I hope you’ve found something that suits your needs and your level. The number of computers and robots that we interact with in our day-to-day lives is steadily increasing. These programmable robot kits for beginners are a great way to gain a basic understanding of these technologies and have fun doing so.